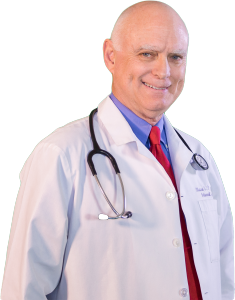 DVM, JD, MD – veterinarian, attorney, physician – three admirable careers, all encompassed in the remarkable life of Blaine Purcell. It can be said with no exaggeration that Dr. Blaine Purcell has accomplished enough in his amazing career to have filled several lifetimes.

Growing up as the son of a U. S. Representative from Texas, the legendary Graham Purcell, Dr. Purcell was in Washington, D.C. from 1962 to 1972, close to the seat of power during some of the most eventful years and important moments in American history. In high school, he was a Congressional page, and his family lived with Vice President Lyndon Johnson’s family when the Purcells first came to Washington.

His family’s tradition of public service no doubt played a big role in Dr. Purcell’s career of helping others. Realizing an ambition he had since he was six years old, Dr. Purcell began his professional life as a veterinarian after graduating from Texas A&M University. A stint in the Green Berets sent him to South and Central America to assist in the establishment of civil affairs in various countries, where as he recalls, “Every day held high adventure and every meal was not a banquet!”

It was while working with the indigenous people and witnessing a great deal of misery
that he considered a career in international law. But he quickly discovered that such a career would not allow him to make the kind of difference he wanted to make, because he would not be able to work one-on-one with people. Instead, after graduating from law school, he went to Washington to work with the Animal and Plant Health Inspection Service, where he was “going to be a bureaucrat and write regulations.”

From there he became a legislative assistant to Congressman Kent Hance and later a lobbyist for alternative energy sources. When a change in administration brought an end to virtually all such programs, Dr. Purcell decided it was time to enter the field that had dominated his thoughts all along – medicine.

With his veterinary training behind him, he was able to complete medical school in less than three years. He practiced internal medicine in Las Vegas for 20 years and in 2007 was designated a Fellow in The American College of Physicians, the society of internal medicine specialists. Fellowship is an honor achieved by those recognized by their peers for personal integrity, superior competence in internal medicine, professional accomplishment, and demonstrated scholarship. It is an achievement to be celebrated and commended.

Dr. Purcell returned to his Texas roots in 2005. His wife, Barbara, was the catalyst for his interest in bio-identical hormone replacement therapy. Her hormones were not balanced. However, within two days of getting pellets implanted, she finally felt relief. As a result, Dr. Purcell is now focusing his private practice on balancing the hormone requirements of women and men with estradiol and testosterone pellets.